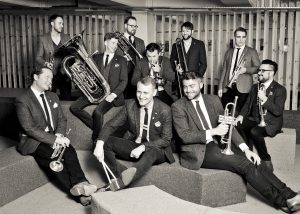 Performances by the Young Dizzy Brasscals and the Edge Grove Brass Band. Join us for a stonking night of brass band music, with drinks and fish and chips. Tickets are £25 for adults and £15 for children (aged 3-17) and include fish and chips. There will be a cash bar.

Formed in Forest Hill – South East London’s melting pot of music making the band has been dishing out their unique recipe of tweed-clad 10-piece drum ‘n’ brass since 2012. They can be seen serving up well-marinated dance floor fillers at top venues such as Fabric, the Forum, Hammersmith Apollo, KOKO, the Roundhouse and Scala, or delivering sizzling sets at UK festivals such as Bestival, Glastonbury, Latitude and Secret Garden Party.

In 2016 the band entered the studio to record their debut eponymous album. A stand-alone single “Paranoid Android” was released in 2017, accompanied by a live-action video remake of the original Radiohead animation by Magnus Carlsson. A festive EP “Sleigh Another Day” then followed in 2018, complete with a parody video of a classic East 17 ballad.

2019 sees the band present a series of ‘re-imagined’ shows at their Brixton Blues Kitchen residency – performing iconic albums front-to-back in their entirety. So far the series has included complete covers of The Strokes debut “Is This It” and Arctic Monkeys’ Mercury Prize-winning “Whatever People Say I Am, That’s What I’m Not”.

+ Google Calendar+ iCal Export
Tickets are not available as this event has passed.

We use cookies to ensure that we give you the best experience on our website. If you continue to use this site we will assume that you are happy with it.OkPrivacy policy